Two Kern Shows, Vol. 1 Excerpts from The Love of Mike and Rock-A-Bye-Baby

The two Kern shows featured on this album were never published in their entirety. As with later Broadway cast albums, only the numbers considered likely to be hits were issued in sheet music, relegating the finales and ensembles to obscure library shelves and drawers. The numbers included here are fine examples of Kern's artistry, and were considered worthy of being heard again by Mr. Aceto, even though the full show is not available. The Love of Mike featured lyrics by Harry B. Smith, possibly the most prolific writer of all time, who also toiled for Victor Herbert. The show arrived in 1917, following his Have A Heart by a week, two weeks later by his Oh Boy! and a few months later by Leave It To Jane. Rock-A-Bye Baby was regarded by Kern as his favorite score before Show Boat. An adaptation of a successful farce entitled Baby Mine, it opened at the Astor Theater in May of 1918, and was reflective of Kern’s ultimate departure from the small and less profitable Princess Theater that had been the site of many of his early successes. 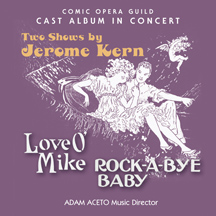