Two Kern Shows, Vol. 2 Selections from THE NIGHT BOAT & THE BUNCH AND JUDY

The two Kern shows featured on this album were never published in their entirety. As with later Broadway cast albums, only the numbers considered likely to be hits were issued in sheet music, relegating the finales and ensembles to obscure library shelves and drawers. The numbers included here are fine examples of Kern's artistry, and were considered worthy of being heard again by Mr. Aceto, even though the full show is not available. The Night Boat and The Bunch and Judy were written by Anne Caldwell, who also provided lyrics for other Kern shows such as Stepping Stones. The Night Boat, premiering at the end of 1919, followed by only a few weeks Kern’s flop Zip Goes a Million. The Bunch and Judy's title was derived from its leading lady, Judy Jordan, and all the men seeking her hand in marriage. Written as a vehicle for Fred and Adele Astaire, the show was loaded, as you can imagine, with dancing. 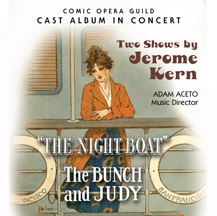 THE BUNCH AND JUDY